I opened my eyes, squinting heavily as my pupils adjusted to the blinding white light. I was laying flat on my back strapped to a long chair unable to move. In front of me sat a small tray of sharp metal objects glistening in the bright light. An angry woman wearing a mask was leaning over me. She’d pick up one of her sharp tools and scrape away at my mouth until she was bored, then switch to a more exciting one. Occasionally when she was feeling gracious, she’d let me spit out a mouth full of blood before continuing to torture me.

I was terrified but tried my best not to show it. When she knew I couldn’t take the pain anymore, she’d pause to interrogate me. “How often do you floss? HOW OFTEN DO YOU FLOSS?!” I did everything in my power not to answer.

The second I had the chance, I ran out of there leaving only my insurance information behind. I flung open the doors and was flooded by daylight. I was starving and my mouth dry. I felt like I hadn’t eaten in days and ran to the nearest sandwich shop.

It happened to be Bouchon Bakery located on the third floor of the Time Warner Center. I quickly ordered the tuna niscoise sandwich and kept moving.

As soon as I made it underground, I ripped open the paper bag and sunk my aching teeth into the moist sandwich. It was delicious — possibly the best tuna sandwich I’ve ever had. It contained just the right level of everything. It was very mayonnaisey, but not overly so. It was extremely salty, teetering on too much, but ended up being just the perfect amount. The fresh lettuce, radishes and red onion gave it a nice crunch, while the garlic aioli and sliced egg added some subtle flavors. And the bread was fresh and salty.

It might not be what Jack Bauer eats after being tortured for an hour, but it sure helped me feel better.

#56: Bacon and Marmalade on Pumpernickel, Prune 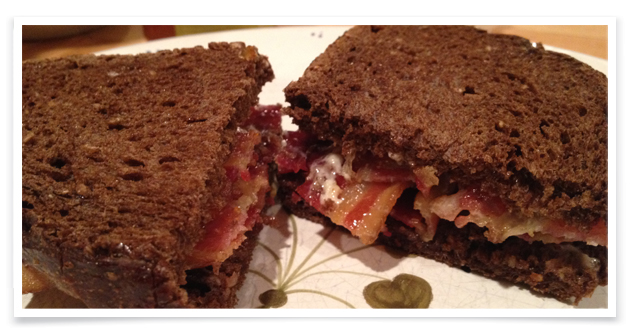 She used to dress me up in girls’ clothes, and I looked good. Of course I did. Whether it’s transforming a three-year old boy into an adorable little girl, cooking a deliciously simple meal or publishing a revolutionary cooking book, when Tamar Adler sets her mind on something, she will exceed your every expectation.

Tamar decided to get into cooking somewhat spontaneously, and somewhat to compete with her younger brother. She begged Gabrielle Hamilton, owner and chef of Prune, for a job as a line cook until she finally said yes. Tamar worked at Prune for a total of twelve days, before deciding it wasn’t for her.

Prune, a legendary New York City restaurant, made it’s way onto the list with a bacon marmalade sandwich. Then, stopped serving it shortly after. So, I had to settle for the next best thing– or in this case the better thing. While Prune didn’t serve lunch (or this sandwich) during Tamar’s short stint there, this sandwich was so inherit to their style of cooking that she had no problem replicating it.

Fry bacon on a large skillet until cooked through. Drain on paper towels and keep warm. Toast bread and generously lather with butter. Tamar told me “Butter is kinda like cheese – people go too light on it.” While I never thought of it that way, I couldn’t agree more. Then heavily apply marmalade to buttered slices. Arrange bacon on top of bread and close sandwich. Cut in half and serve with 1-2 bottles of rosé and handfuls of macadamia nuts.

The sandwich was surprisingly great. I’d never expect these ingredients go together, but it worked. The sweetness of the marmalade and the smokiness of the bacon totally balanced each other out. This sandwich could work for any meal. It happened to be our dinner, but I imagine it makes for a great breakfast or lunch sandwich, and even possibly a decadent dessert. It tasted like a really delicious campfire. But before even tasting the sandwich I knew it was going to be great — Tamar Adler made it for me! 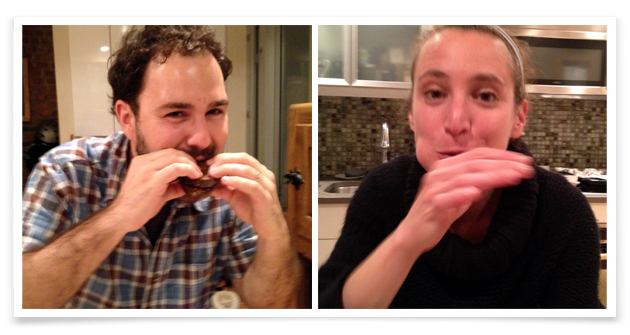 Tamar Adler is the author of An Everlasting Meal: Cooking with Economy and Grace. She worked as an editor at Harper’s Magazine from 2001 through 2004. Having cooked at Prune restaurant one summer, after leaving Harper’s, Tamar worked as a personal chef, wrote, and did research for Dan Barber of Blue Hill and Blue Hill at Stone Barns.

In Roaring Brook Elementary School, I was good friends with Dan Cohn. We’d BBQ at his family’s lake house. Play competitive games of whiffle ball, volleyball and football — his family typically won. We’d swim in his pool and play Adventure Island and Sonic on Sega. I did better in the video game category.

At Robert E. Bell Middle School, I became good friends with Ryan Mcree. I mostly credit Jim Carrey movies, Calvin and Hobbes and NOFX. We once dressed in togas for a latin class skit, tore up each others exams in the middle of class, and wrote a book of comedic short stories called “Stories That Never Quite Made It” that we were confident would one day make it. Here’s one of them:

NOT DEEP ENOUGH
A man dove 13 feet into a pool. The pool was only 12 feet deep.
Download “Stories That Never Quite Made It” here >

By the time we got to high school, things changed. I grew a pony tail and painted flames on my car. And they played sports and got a lot of girls. We went our separate ways and formed new friendships. But we’ll always have that history to fall back on. Well, that and a sandwich.

I wasn’t surprised to get a call from DC and the Creeman one Friday night wanting in on The Quest. We made plans to meet up the next day at Frankies in the late afternoon. The funny thing about history is you pick up right where you left off. Sure, we haven’t seen each other in long time. We’re now married, having kids and have real finances to worry about. But deep down, we’re just a bunch of kids, sitting around munching on some sangys.

And this sangy is one you want to be munching on. You haven’t had a BLT until you’ve had one at Frankies. It will seriously change the way you think about this classic sandwich. The bacon is like nothing you’ve ever tasted. The thick chewy slabs of meat are so salty and rich in flavor. The mayo is generously lathered across the thin, crispy pieces of Sullivan Street Bakery ciabatta style bread. Lastly, the lettuce and tomato allow you to believe you’re ingesting something healthy into your body, but also add a nice freshness to each delicious bite. The roast beef sandwich with pepperoncini and red onion also makes for a nice snack!

This might have been the first sangy I’ve shared with these old friends in a long time, but I hope it’s not the last.

It’s one of the scariest things for a son to hear. “. But your mom is in the hospital.” Those first three words are essentially meaningless. I got the call from dad one afternoon while at work. Every imaginable scenario raced through my head. It was discovered that my mom had an aortic aneurism. It’s a swelling of the aorta that can possibly lead to heart surgery, or much more serious things if not monitored properly. Reading Wikipedia and WebMD only made things worse. I was extremely scared.

Everything was and will be okay. The aneurism at this point is relatively small and was discovered early enough to now be carefully monitored. There’s a very good chance that my mom won’t need surgery for a long time, if ever.

As I was told this, I felt relieved but still shaken up, and decided to leave work early to go to the hospital. My brother did the same. We met at Grand Central, though I was early, he was late, we missed our train, and I had about 25 minutes to kill. Now it just so happens, there’s a sandwich located at the Cipriani Dolce Restaurant in Grand Central. While others were dining on their overpriced Filet Mignon and $16 glasses of Pinot Grigio overlooking chaotic Grand Central, our dinner came in a styrofoam container and was consumed on a Metro North train.

The sandwich — a chicken club with too much mayo, mushy bread and soggy bacon — was fine. Clearly, not worth the money or the fact that you’re eating dinner in a train station. This would have been a different sandwich if “the bacon was crisp” or “the bread as well-toasted as a campfire marshmallow” as the description read. I can only assume eating at the restaurant instead of taking it to go improves the quality. Not that any of you were flocking to eat at Grand Central before reading this post, but I wouldn’t recommend it.

It was a frightening day, but I’m fortunate that this is the first time I’ve received a call like that. I’m relieved that the news I heard wasn’t worse and everything is going to be fine. And I’m always happy to knock another one of the list.

This one’s for you, Mom. We love you. 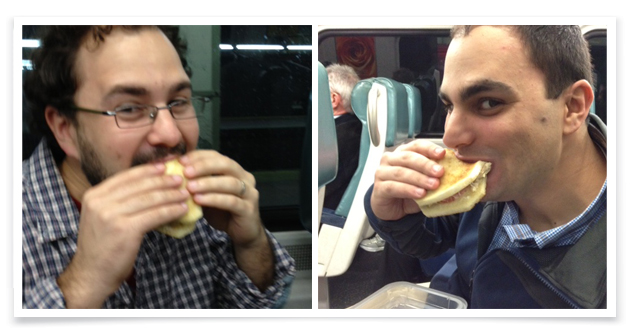 I know what you’re probably thinking. I promised at least a dozen people I’d get this sandwich with them. I’m sorry to you all, but I can’t wait around forever. I’ve got a bun in the oven and the timer is ticking, which means I got some sandwich eating to do — and fast.

Well, today was my day to test it out. I unlocked my bike for the first time since last winter, and pedaled up to Williamsburg. Note to self: leaving your bike outside all winter is an awful idea and you shouldn’t expect your bike to still work. Eventually, I made it.

I met my friend Mo outside the cute little Brooklyn sandwich shop. We eventually nabbed a couple of stools alongside the counter, where we sipped our iced coffees and waited for our Scuttlebutts to be ready.

Essentially a huge salad sandwich, the Scuttlebutt is held together by two remarkably sturdy slabs of focaccia laced with olive oil and sprinkled with sea salt. The inside is filled with a schmorgusbordu of pickled, salty things like mesclun greens, pickled vegis, hard boiled egg, huge clumps of feta cheese, radishes, olives, capers, pickles, and who knows what else. It’s then trenched with a delicious aioli salad dressing. The name Saltie is not just a clever name. If every vegetarian sandwich tasted this good, chickens and cows would be pumped.

Watch out Quest for 101. I’m running out of time and left with no choice but to attack you with full force.